The Christmas Truce - 100 Years On 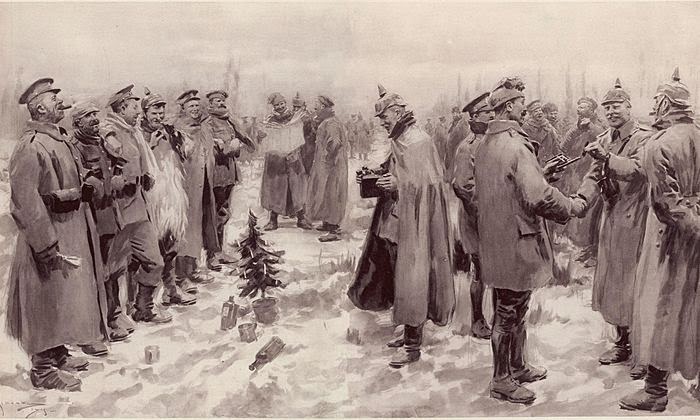 This year, all over the world, we have been commemorating the outbreak of the First World War, or the so-called  'war to end all wars'.  It stands out in our collective memory because of its sheer brutality.  It was the first truly mechanised war...the first time that machine guns, tanks and air power became crucial tools for the mass slaughter of 'the enemy'.   Men mowed down like grass.  Trenches, rats, corpses and mud.

And yet we also hear of glimmers of light.  We've heard of 'Woodbine Willy' - the 'trench-priest' who gave woodbine cigarettes and spiritual comfort to the troops.  We've heard many tales of heroic acts of self-sacrifice...of men laying down their lives for their comrades.  But perhaps the greatest glimmer of light is the story of the 'Christmas Truce'.

Very little can be said with certainty about this event.  But it seems certain that something very significant happened on that first Christmas of the war, 100 years ago this very night.  According to the stories, German soldiers began to sing Christmas Carols, and to call to their English enemies across No Man's Land.  Tentatively at first, the English soldiers responded, and then one by one, soldiers from both sides began to climb out of their trenches, to meet one another in No Man's Land.

Gifts were exchanged.  One English soldier ripped a button from his Greatcoat, and attached it to a card with his name and address.  Another gave a Christmas Pudding to a German soldier.  One legend says that several games of football began, right there in No Man's Land.

Among the mud and the bullets, the Christmas Truce offered a glimmer of hope. The possibility that something other than 'total war' could solve human conflict.  A little light shone in the darkness.

The prophet Isaiah, thousands of years ago, prophesied that 'the people who walk in darkness have seen a great light'.  Christians read those lines as pointing to Jesus, the light of the world, who entered the darkness of human existence on that First Christmas night.  In many ways, the world was just as dark then as it was in 1914...

The land into which Jesus was born was under the occupation of an invading army.  Herod the Great, the local ruler, was just as blood-thirsty as any modern day terrorist.  The Taliban of Pakistan murdered children in their classrooms only last week. Herod ordered the murder of children in Bethlehem.  Today we see millions of people fleeing over national borders.  Mary and Joseph were forced to flee into Egypt soon after Jesus’ birth.  All over the world, even today, children are born in tents and slums and stables, without being able to ‘Call the Midwife’! Some even get laid in mangers, animal feeding troughs, just as Jesus was.

Human beings then, just as now, have declared war on God.  By the way we structure our society; we declare every day our active opposition to God.  God tells us to love our neighbour, and to welcome the stranger.  But we ignore our neighbours, and try to keep the strangers out.  God tells us to look after the weak and the sick...but we vote in our millions for politicians who refer to the weak and the sick as 'scroungers'.   God tells us to focus our spiritual lives on him, but we prefer to focus on the acquisition of things...the new car, the new kitchen, the latest gadget.  We hear the angels sing of 'peace on earth'...but we still solve our differences with the barrel of a gun.

Human beings have declared war on God...but God does something incredible in return.  God declares his own Christmas Truce.  In the middle of the night, into the darkness of human greed, violence, poverty and war, God sends a baby. God sends a baby who will grow up to take upon himself all that the human war against God can do.  Human beings will throw everything at this baby that they can think of.  As he grows up they will make him a refugee, they will keep him in poverty, they will throw kings, invading armies and lawyers at him; they will even throw religion at him.  And finally, when every trick in the book of War against God is exhausted, they will whip him, and beat him, and nail him to a tree.

But to even this final act of war, God responds with a Truce.  With the dawn of the sun on Easter morning, this baby will rise ...rising above human war, rising above human hate.  To everyone who gives up the human war against God, God offers life that will go on for ever.  To everyone who cries out to God, God gives them the status of a child of God.  And by that act of Truce, this baby, born in Bethlehem on this night, becomes the first-born of all the sons and daughters of God.  He becomes their brother, and their King.

And so, we are left with only one question on Christmas Night.  How will we respond to God's Christmas Truce?  Will we give up our participation in the War against God?  Will we, like the soldiers of Christmas 1914 decide that our human leaders are just wrong...and seek a new way of life instead?  Will we, like the Wise Men and Shepherds look for a new King, a new leader?

The Christmas Truce of 1914 was a wonderful moment.  But the story has a painfully sad ending.  With the dawn of the next day, hostilities were resumed.  The political power of the leaders of those soldiers was too great.  Within 24 hours, machine guns were once again ripping human beings to shreds.  If only those soldiers had agreed with each other that enough was enough!  If only they had agreed then and there to make the Truce permanent!

And that, finally, is our choice tonight.  We can agree, here and now, to accept a new way of living, a new leader, a new King, born in a stable.  We can say that we've had enough of the human war against God, and decide to live in a completely new way.  Or with the turn of the clock, and the dawn of a new day, we can go back to our trenches and start the war all over again.  I wonder which choice you will make.  Amen.

Tom Kennar
A priest in the Church of England... currently Rector of Havant, Hampshire, in the UK. Also Honorary Canon to Portsmouth Cathedral (UK) and two Cathedrals in Ghana, Cape Coast and Ho (Volta Region).